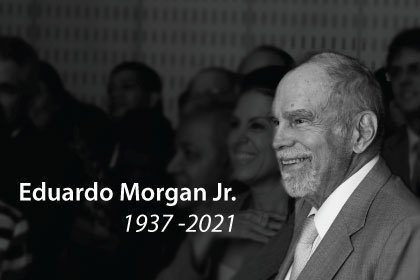 It is with great sadness that we inform of the passing of our beloved founding partner Eduardo Morgan González on July 8 at the age of 84.

In the public sector, he was Minister of the Interior and Justice in 1968 and, in addition, personal envoy of the President of Panama to the government of Japan from 1979 to 1982.  He was also ambassador of the Republic of Panama in Washington, D.C., United States, from 1996 to 1998. Currently he was President of the Center for Conflict Resolution in the Americas and the Caribbean. In addition, he was a member of the Board of Directors of the Panama-Israel Institute of Culture and President of the Panama-Argentina Association of Friends.

His exemplary professional career was recognized when he was awarded  in 2008  the Medal of Honor for Merit  “Don Justo Arosemena”,  in recognition of his 25 years as an active member of the National Bar Association of Panama and his outstanding practice in the field of Law; that same year he received recognition from the Association of International Lawyers for his career in the field of law and for his permanent contribution to the development and protection of Panama as a banking and international service center, including the Colon Free Zone. He also received the “Dr. Eloy Benedetti” medal from the Curatorium of the Deanship of Law and Political Science of the Universidad de Panamá. This distinction was in honor of his successful public career, as well as for his constant defense of Panama as a platform for international services. In 2015, Mr. Morgan was honored with the “Universidad 2015” award.   This great recognition was awarded by the Honorable Academic Council of the Universidad de Panamá.   Dr. Morgan, who graduated in 1961 first in class of the Faculty of Law and Political Science of the Universidad de Panamá, was recognized for his extensive and successful career and for his valuable contributions in the field of law in our country.

Along with his work as a lawyer and exploiting the relationships he established through his work as a diplomat, he dedicated much of his life to positioning Panama as a center of service and international business, drafting? and promoting legislature that today is central to the Panamanian economy such as:

He is survived by his wife Diana and a son and a daughter: Eduardo Enrique and Diana Gabriela.  Eduardo Morgan Jr. leaves behind an extensive life of work, commitment, and love for his own.