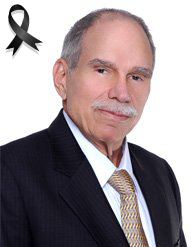 Eduardo Morgan Jr. was a Founding Partner at Morgan & Morgan and COB of the Board of Directors of the firm. Mr. Morgan practice business, corporate and international law for more than 50 years.

In the public sector, Mr. Morgan Jr. was Ministry of the Interior and Justice in 1968, and a personal envoy of the President to the government of Japan from 1979 to 1982. He was also Ambassador of the Republic of Panama in Washington D.C., United States of America, from 1996 to 1998.

Mr.  Morgan Jr. was recognized in 2008 by the International Lawyers Association of Panama for his work in the field of law and permanent contributions to the development and defense of Panama as banking and international services center namely, the Colon Free Zone, the Ship Registry, and the Corporations Law, among others. He was also honored by The National Bar Association of Panama with the Meritorious Medal “Justo Arosemena” in recognition for his 25 years of outstanding performance in the practice of law. In 2016, Mr. Morgan was honored with the “Dr. Eloy Benedetti” medal by the Curatorium of the Dean’s Office of the School of Law and Political Science of the University of Panama for a successful public service career, as well as his continued defense of Panama as an international services platform.