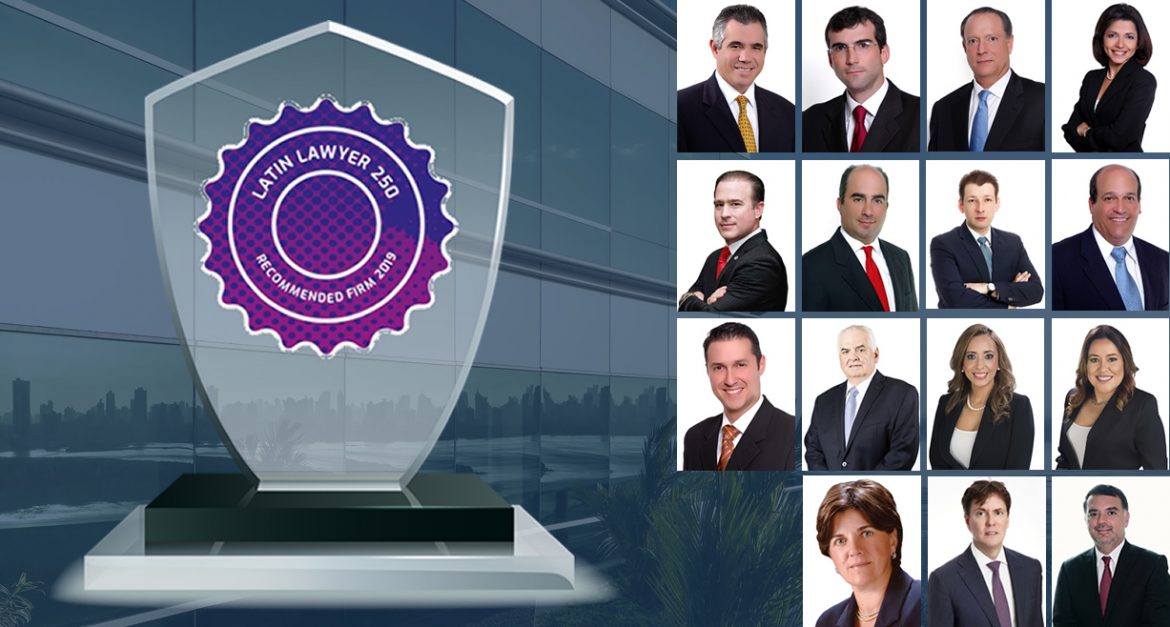 The 2019 edition of Latin Lawyer recommended Morgan & Morgan as the largest firm in Panama.  “A large headcount and an established presence in the market gives Morgan & Morgan the manpower and experience required to guide some of Panama’s most significant transactions”, states the guide. 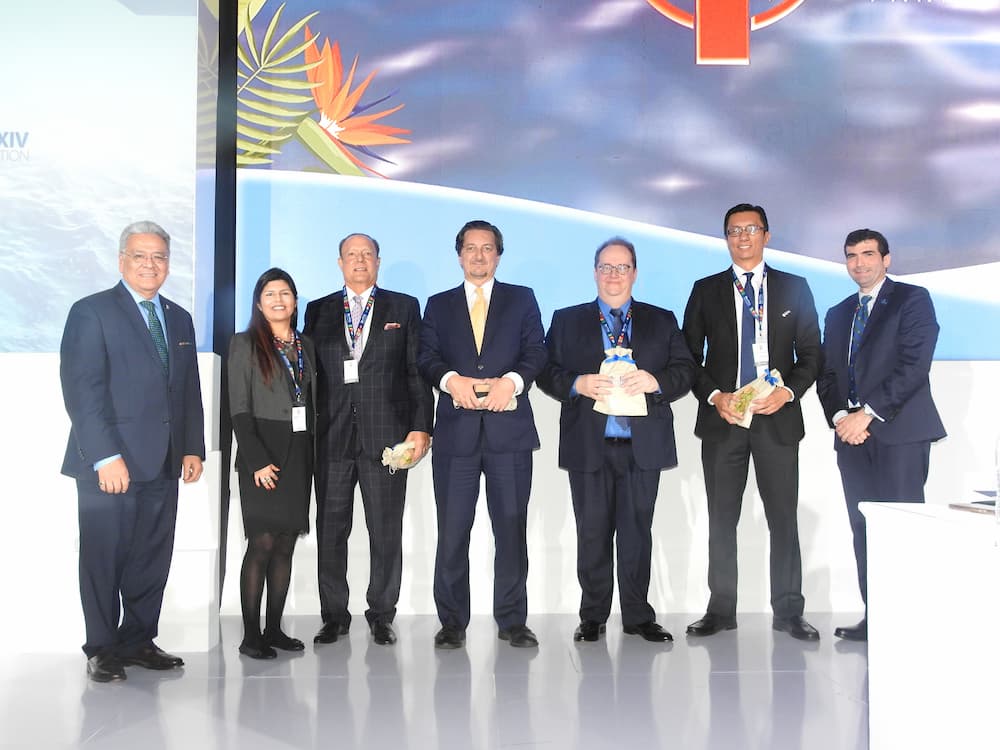 More than 500 local and international companies and individuals from the maritime industry gathered in the Republic of Panama for the fourteenth edition of Panama Maritime Conference & Exhibition, the largest maritime event in Panama, which took place from March 17th to March 19th, 2019, at the Megapolis Convention Center.

Several topics were discussed during the conferences, being “Legal Implications of Technological Disruptions in Shipping, Ports and Logistics and Recent Development in Maritime Financing” one of the most attended, in which Dr. Francisco Linares served as the moderator. During said conference, Dr. Enrique De Alba talked about “Legal Implications of the New Incentives for Maritime Financing in Panama”.

Morgan & Morgan excelled as one of the main sponsors to this event in which our attorney Andres V. Mejia acted as a member of the Organizing Committee. 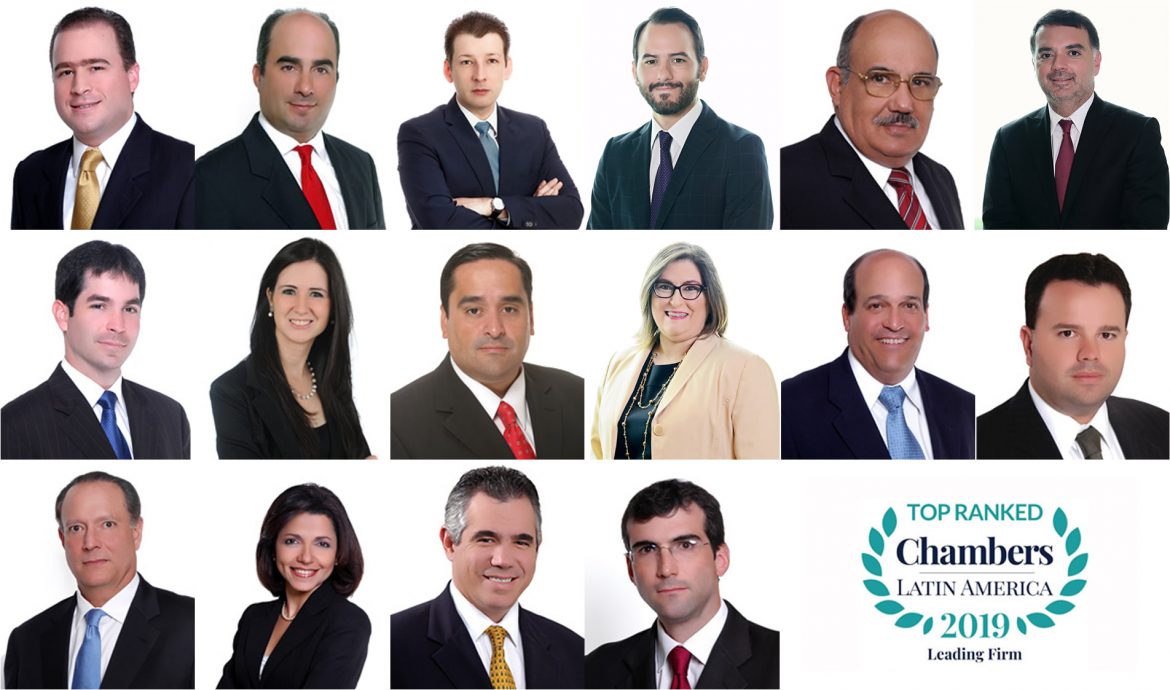 Panama, September 25, 2018. Morgan & Morgan and sixteen attorneys of the firm were recognized in the Chambers Latin America 2019, guide of the best lawyers and law firms across 20 countries of Central America, the Caribbean, South America and Mexico.

One of the clients interviewed stated that “Judging by the results that the firm achieves, I can say that their advice is effective and arrives in a timely manner. I would highlight their availability and technical competence”.

With over 80 lawyers and 20 practice areas, Morgan & Morgan is a full service Panamanian law firm, regularly assisting local and foreign corporations from different industries, as well as recognized financial institutions, government agencies and individual clients. Of particular note is our continuous advice for clients involved in all stages of the development of important projects related to energy, water supply, construction, oil, mining, public infrastructure, retail, ports, transportation, among others. Learn more at www.morimor.com. 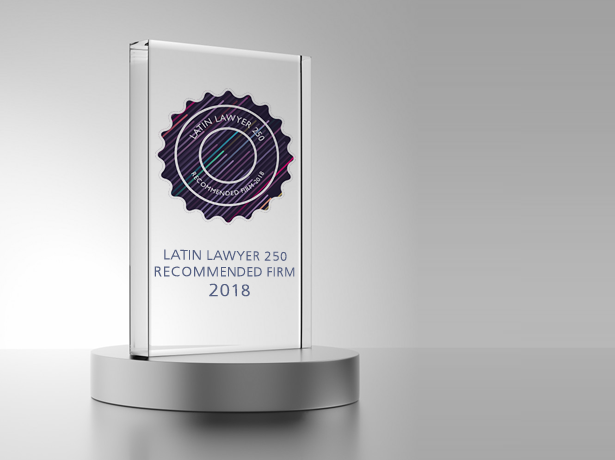 Once again, Latin Lawyer 250 recommended Morgan & Morgan as the largest firm in Panama.  “A large headcount and an established presence in the market gives Morgan & Morgan the manpower and experience required to guide some of Panama’s most significant transactions”, states the guide.

This 2018 edition looks at each jurisdiction firm by firm and presents a complete analysis of most recent developments, practices and leading professionals field by field. 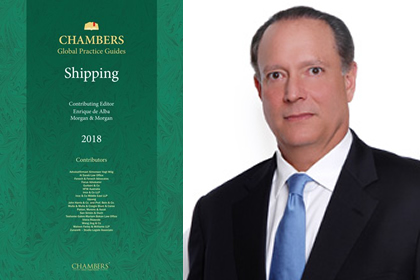 Partner Enrique De Alba contributed with the Chambers & Partners Shipping Guide 2018. Mr. De Alba was selected among multiple experts from the maritime industry, to prepare both the introduction and the complete program of this publication. The guide analyzes the most relevant aspects that affects the maritime industry in twelve jurisdictions. 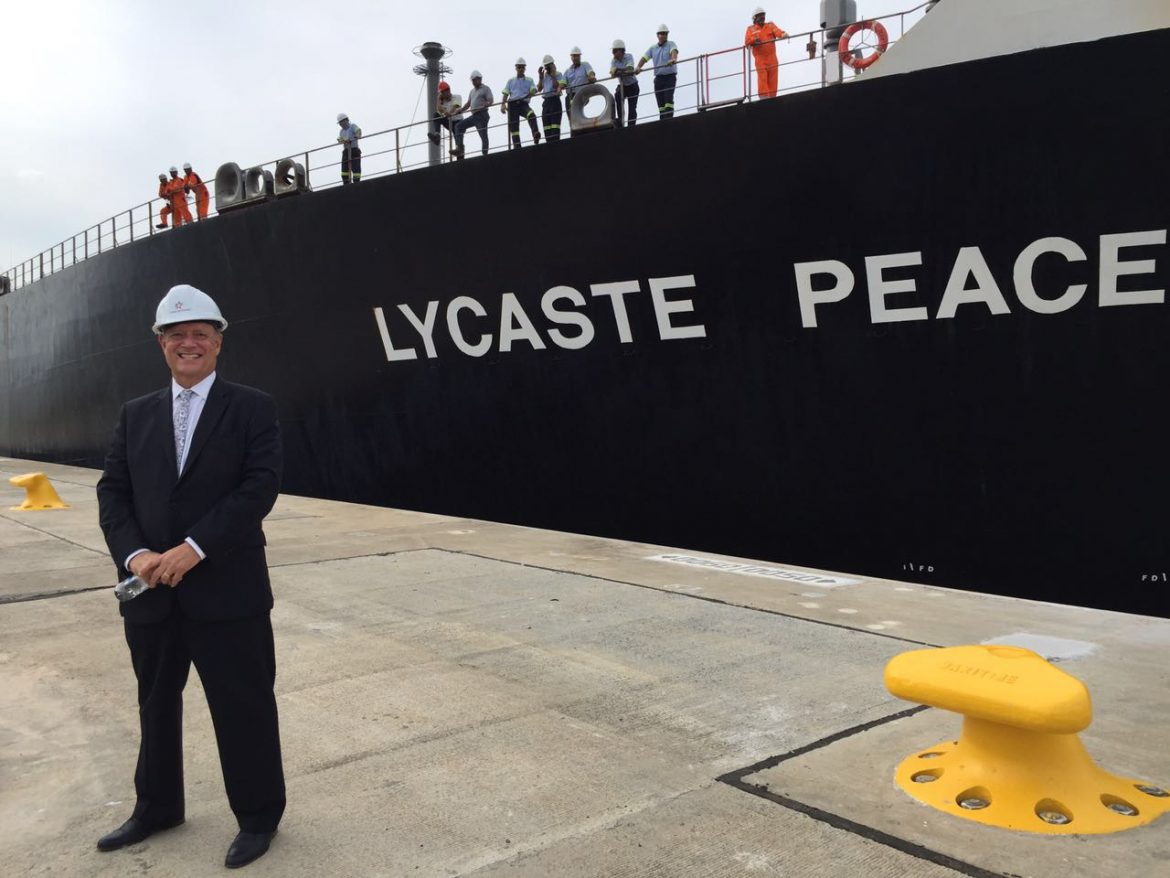 On June 27 of the present year, a historic event for the Canal and the International Merchant Marine Registry of the Republic of Panama occurs.

One day after the new locks of the Panama Canal were inaugurated with the transit of the container vessel “Cosco Shipping Panama, the first vessel registered under the Panamanian flag transits, which coincides with being the first transit of a liquid petroleum gas vessel named “Lycaste Peace” in its commercial traffic from Houston, Texas to the Port of Hitachi, Japan, owned by the Japanese shipping Line Nippon Yusen Kaisha (NYK Line) and represented in Japan by Mitsubishi Logistics Corporation. The Resident Agent of this first transit of the vessel registered in Panama is Morgan & Morgan Law Firm.

Since the inauguration of the Expanded Panama Canal, the vessel that has paid the highest toll so far and also set a new record due to the Expanded Canal was the vessel “Mol Beyond” which paid the sum of $837,203.00.

Several precedents are well marked on the Panama Canal and its International Merchant Marine Registry, whose origin is given with the enactment of Law 63 of December 15, 1917 which amends and supplements the Fiscal Code, giving the power to grant the national flag to a vessel that so requests it and which will celebrate its 100th anniversary next year 2017. It is understood according to records that the first vessel registered under the national flag was the carrier Belén Quezada.

By Law 8 of January 12, 1925, procedures for the nationalization of merchant vessels are created and this law formally establishes the Merchant Marine Registry of the Republic of Panama.

Nowadays, the Maritime Registry of Panama is proud and honored to be the world’s largest register with approximately 8,831 registered vessels to June 14 of this year representing 235,295,719.26 gross tons. The registration of vessel and other activities under the umbrella of the Panama Maritime Authority, as of December 2015 contributed to the treasury the sum of $162,089,501.00.

Among the legal instruments that have brought success to the merchant marine of the Republic of Panama, we can mention in addition to those already mentioned:

Subsequently, from 2008 it was decided to update all our legislation related to the maritime activity and four new legal instruments are enacted:

I mention these legal instruments, because without them, the development of our merchant marine, international forum of maritime litigation and port activity would had been set aside by the competition provided by countries that develop these same type of activities associated with the maritime industry.

The momentum that our lawyers have given to the development of maritime activity in the Republic of Panama to the challenges of trade, should never stop because the success of Panama in this important industry is due to the constant renewal of its legal instruments, seeking new and better ways for the development of the maritime sector.

The foregoing leads us to mention an important bill that is planned to be submitted to the National Assembly this month of July on maritime financing. This bill creates a special legal regime for financing operations of the local and international maritime industry, where tax, labor and immigration incentives are granted to companies that carry out these operations from Panama.

The entities that could benefit from these incentives are the general license, international or representative banks duly authorized by the Superintendence of Banks, companies carrying out operations to design, structure and develop the financial conditions of maritime credit and its guarantees, regulated financial companies and maritime financing entities and joint ventures (Joint Venture) of the Panamanian State with individuals.

Among the tax incentives will be the exemption from paying income tax from such funding for the construction and purchase of vessels. In order to benefit from this tax incentive, these entities must establish a separate accounting which states the recording of the date of execution of each loan.

Those companies whose maritime financing operations are carried out in the Republic of Panama or shipyards engaged in the construction and repair of commercial vessels, yachts and others will not cause the payment of income tax.

There are also exempted from paying income tax, interest and fees earned by banks for maritime financing activities that are duly accredited for such activities, as well as income from insurance and reinsurance that secure credits from certified maritime financing institutions and/or Bankable Maritime Projects.

The bill in question establishes a low import tax on machinery and equipment needed for the development of the maritime industry, no greater than 3%.

As for immigration and special labor regime, it is aimed to create the necessary conditions to help develop the relevant maritime activities with the maximum efficiency required by a maritime center of this nature.

A Certifier and Supervisory Board of Maritime Financing Entities is created, which would consist of the following members:

Before I conclude and the reason for this article is partly to draw attention to a provision that has been introduced at the last minute to the maritime financing bill mentioned herein, where it is imposed a term of 20 years to the tax exemptions, incentives and other benefits that this new project aims to create in the Republic of Panama.

It is advisable to study this condition or term carefully, because such a sophisticated and specialized activity as the maritime financing activity, should not be set a peremptory period, given than this period would undermine completely the intention to create a new activity that could pay off to the economy of the Republic of Panama, which in other international financial centers produce optimal results.

Let us hope that all the good spirit that every Panamanian has had in recent days with the opening of the newly expanded locks of the Panama Canal and its role as a facilitator of international maritime trade, help to understand how important it is to maintain our competitiveness in this important industry.

It is a true and lawful translation into English of the original document written in Spanish  – Michelle Williams – Authorized Public Translator – Resolution No. 5775 of November 12, 2014 – Republic of Panama.

Morgan & Morgan advised Panama Ports Company, S.A. (PPC), as seller, in the sale of certain Rubber Tyred Gantry Cranes to Infraestructura Portuaria Mexicana, S.A. de C.V. (IPM), as purchaser.  The cranes were part of an inventory of equipment owned by PPC not necessary for the operation of PPC in the Ports of Balboa and Cristobal.

PPC is a subsidiary of the Hong Kong-based conglomerate Hutchison Whampoa Ltd. The company develops and operates the Port of Balboa and the Port of Cristobal on the Pacific and Atlantic coasts of the Republic of Panama.

On November 10th, 2014, was held the conference “Exploring new markets…Panama”, organized by the Law Society of England & Wales, an independent professional body for solicitors in the UK.

The panelists of this seminar discussed topics such as the political and economic climate for UK companies operating in Panama and different opportunities for UK law firms and their clients developing businesses in this market. Mr. Eloy Fisher, Chief Economist of the Ministry of Economy and Finance of Panama took part with the topic: “Panama, recent economic development and future perspectives“. Other panelists included: Mr. Arsenio Dominguez, Permanent Representative of Panama to the International Maritime Organization (IMO); and Mr. Gilberto Arias, Ex-Ambassador of Panama in London; and Mr. Enrique de Alba, partner and head of the Ship Finance and Registration Practice Group of Morgan & Morgan in Panama.

After the presentations, the event was followed by a networking reception sponsored by Morgan & Morgan.  Partner Susana Reyes and associate Orlando Tejeira, from the London office of the Morgan & Morgan Group (MMG), also participated as representatives of MMG in this conference.

On March 19 2013, at the Ritz Hotel in London a cocktail was held to commemorate the 30th Anniversary of the Morgan & Morgan offices in that city. It was also an opportunity to celebrate the landmark 90th anniversary of the Group.  The partners Rogelio Tribaldos and Juan David Morgan Jr. participated in this event with the presentations ¨ Fiduciary Services in a Changing World ¨ and ¨ Arrest of bunkers, cargoes & assets other than ships in Panama ¨ respectively.