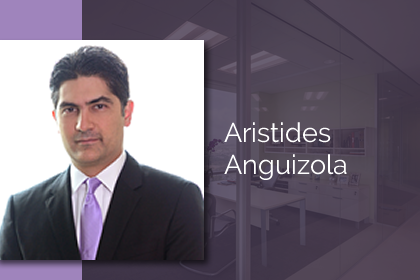 Panama, January 6, 2020. Morgan & Morgan is pleased to announce the promotion of Aristides Anguizola to the partnership of the firm. The designation of Mr. Anguizola comes to reinforce the firm´s already robust Corporate Law team.

Mr. Anguizola has concentrated his practice in mining and has significant experience providing legal support for mineral exploration and mine development and finance. He is often involved advising clients in transactions related to corporate and commercial, project finance and development, mergers and acquisitions, banking law, capital markets, and regulatory work.

With almost ten years of experience as a corporate lawyer, Mr. Anguizola has acted as co-counsel on complex mega-projects such as Cobre Panama, the most significant private sector investment in the country; Metro de Panama, the most important public infrastructure project under development in Panama; and Metro Bus, the public bus rapid system for Panama City. Recently, he was part of the team that advised the Ministry of Public Works on the drafting and approval of the new law for public-private partnerships (PPPs).